Les Vignes Oubliees translates as The Forgotten Vines, which was in fact the fate these particular vines were suffering until Jean-Baptiste Granier and Ollivier Julien recognized their potential. Planted on terraces and in valleys near the commune of St. Privat in the Terasses du Larzac appellation of the Languedoc, these vines were unsuitable for the industrial agriculture that dominated local production. Now that the vines are farmed organically and the wine made manually, the true potential of the terroir can shine through.

Especially cool is the barrel cellar, a natural subterranean grotto that was used in Roman times for the pressing and storage of olive oil (see photo). The natural conditions are perfect for barrel ageing the wine – justifying the difficulty of getting the wine down into the cave and pumping it back up when it comes time for bottling! 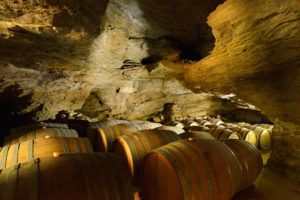